哥伦布会议中心德鲁里酒店及套房
查看所有资料
详情
点评
Travel Happy® with Drury Hotels. You have enough to worry about while you're traveling. Let us take a few things off your plate, so you can focus on the good stuff. Breakfast, Wi-Fi, dinnertime snacks, soft drinks, popcorn, business center, workout facilities and more - we've got you covered! A microwave and refrigerator can be found in all rooms. Drury Hotels is 100 percent family-owned and operated. At every one of our 150+ locations, you'll consistently experience rooms with crisp sheets, fine linens and cozy surroundings to ensure a good night's sleep.
干净度
9.3
舒适
9.2
设施
9.4
地点
9.5
整体
10.0 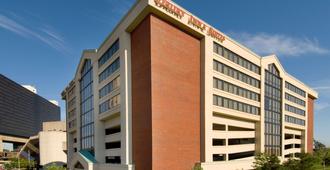 第1位
哥伦布会议中心德鲁里酒店及套房
9.1
极好 9.1
根据527则点评
详情
点评
¥823
查看优惠
勒维科傲途格精选酒店
查看所有资料
详情
点评
Housed inside the historic LeVeque Tower in the heart of downtown, Hotel LeVeque, Autograph Collection adds a shimmer of light to the city of Columbus. Effortlessly blending historic and elegant design, our boutique hotel boasts unique rooms complemented with sophisticated décor and thoughtful technology. Rest easy with our evening turndown service and luxury bedding accompanied by our flat-panel TVs, excellent when connected with your laptop for work and entertainment purposes. When the cravings arise, head to The Keep Liquor Bar, our modern French brasserie and bar offering delectable bites, refreshing beverages and a enchanting atmosphere. Planning a meeting or big event in the Columbus area? Hotel Leveque makes the ideal venue for weddings and corporate gatherings. If you want to make an immediate impression on your guests and leave them with a truly memorable event, look no further. Let Hotel LeVeque, Autograph Collection be the backdrop for a successful retreat in Columbus, Ohio.
干净度
9.4
舒适
9.4
设施
10.0
餐食
0.0
地点
9.4

第2位
勒维科傲途格精选酒店
9.1
极好 9.1
根据267则点评
详情
点评
¥1147
查看优惠
哥伦布市中心希尔顿酒店
查看所有资料
详情
点评
Hilton Columbus Downtown offers a contemporary presence in the eclectic urban hub of Columbus. We are within walking distance to over 300 dining and entertainment venues in the Short North Arts District. Directly connected to the Greater Columbus Convention Center by sky bridge, our hotel is also within one block of Nationwide Arena and the North Market. The primary business and government districts are nearby and John Glen Columbus International Airport is a quick 10-minute ride away. Our hotel features a stunning art collection comprised of over 225 original pieces by Central Ohio artists. Gallerie Bar and Bistro is regularly recognized as one of the Top 10 dining spots in the city, featuring items from local farmers and artisans who maintain sustainable practices. We also offer an indoor pool, fitness center and over 24,000 sq. ft. of meeting space.
干净度
9.2
舒适
9.2
设施
9.7
地点
9.5
整体
9.6

第6位
凯悦哥伦布/ Osu酒店
8.6
极好 8.6
根据573则点评
详情
点评
¥635
查看优惠
哥伦布市中心万丽酒店
查看所有资料
详情
点评
Embrace the unexpected at Renaissance Columbus Downtown Hotel. Our unique hotel is conveniently located in the heart of the city so you can easily explore nearby attractions such as the Ohio Theatre, German Village and Columbus Convention Center. Delight in our charming hotel's whimsical design featuring local artwork, eclectic décor and upscale amenities. Take a dip in our rooftop pool or enjoy a moment of quiet at our Club Lounge. Savor a delicious bite at our signature eatery, Latitude 41, or plan your next adventure over cocktails at Bar 41, our own downtown hotspot. If you're looking to host a stylish wedding or event, our chic venues will both accommodate and delight your guests. After a day of adventure, retire to our comfortable gues trooms complete with fashionable décor, sumptuous bedding, deluxe toiletries and inspiring views of the city skyline. Feed your curiosity with a stay at our downtown Columbus hotel and discover the city's hidden treasures.
干净度
8.7
舒适
8.5
设施
7.8
餐食
0.0
地点
8.8 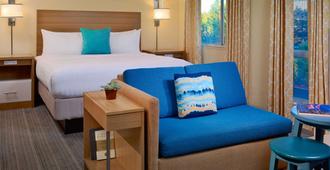 第8位
哥伦布都柏林圣淘沙集团es套房酒店
8.5
极好 8.5
根据331则点评
详情
点评
¥512
查看优惠
哥伦布市区公寓式酒店
查看所有资料
详情
点评
There's something special about an extended stay at Residence Inn Columbus Downtown. Once known as the historic 1927 Buckeye Bank Building, our downtown hotel pays homage to its history through preservation of the original architecture. The lobby features a 44-foot soaring cathedral ceiling which is deeply coffered and has classically inspired motifs such as rosettes, dentils and a Greek key design. Take a moment to relax and recharge in your pet-friendly, apartment-style suite, boasting free Wi-Fi and a fully equipped kitchen, then check out the popular attractions nearby such as The Ohio State University and Nationwide Arena®. If you're attending a seminar at the Greater Columbus Convention Center, take care of work tasks in the privacy of your room or by using the services in our on-site business center. Get your day off to a solid start by stopping by our complimentary breakfast buffet for hearty and healthy options. A unique stay awaits when you reserve accommodations at Residence Inn Columbus Downtown.
干净度
8.8
舒适
8.5
设施
7.6
地点
9.0
整体
8.0

第10位
哥伦布凯悦丽景湾酒店
8.4
极好 8.4
根据829则点评
详情
点评
¥829
查看优惠
哥伦布市区万怡酒店
查看所有资料
详情
点评
At Courtyard Columbus Downtown, enjoy the excitement of the urban setting and the nearby attractions such as COSI and Ohio State University. With our convenient location in Arena District, you have easy access to North Market, Greater Columbus Convention Center and Nationwide Arena. During your visit to our Midwest destination, admire the alluring architecture of the 19th-century homes in German Village, or discover the hip bar scene in the Short North. After exploring the energetic city, return to our modern hotel that has a rich history dating back to World War I. In our rooms, you can lounge among our soft linens, watch your favorite channels on our 32-inch flat-screen LCD TVs or make professional strides at our oversized ergonomic workstations. In the morning, squeeze in a quick workout at our 24-hour fitness center stocked with cardio equipment and free weights. With a distinctive blend of charming convenience and boutique satisfaction, Courtyard Columbus Downtown will stimulate your stay in Ohio.
干净度
8.9
舒适
8.7
设施
6.8
地点
8.6
整体
7.3

第11位
哥伦布市区万怡酒店
8.3
极好 8.3
根据425则点评
详情
点评
¥538
查看优惠
威斯汀南哥伦布大酒店
查看所有资料
详情
点评
Join us for a rejuvenating stay at The Westin Great Southern Columbus. Situated near the German Village in a historic, beautifully renovated red brick building first opened in 1897, we offer a relaxing getaway in the heart of downtown. Our newly remodeled hotel offers a blend of timeless elegance, modern sophistication and wellness features created to help you eat, sleep, move, feel, work and play well. Collaborate or celebrate in our gorgeous Grand Ballroom, consistently acclaimed as the premiere event venue in Columbus. Hit your stride in the state-of-the-art WestinWORKOUT® Fitness Studio. Our three distinctive restaurants fuel your days and enliven you evenings with signature SuperFoodsRx cuisine and vibrant ambiance. After a day of travel, meetings or exploring Columbus, you'll look forward to relaxing and recharging in our newly reimagined hotel rooms and suites featuring signature touches, including our Westin Heavenly® Bath and sumptuous Westin Heavenly® Bed.
干净度
8.6
舒适
8.6
设施
7.4
地点
8.8
整体
8.0

第12位
威斯汀南哥伦布大酒店
8.1
极好 8.1
根据359则点评
详情
点评
¥836
查看优惠
哥伦布市中心假日酒店 - 国会大厦广场
查看所有资料
详情
点评
Our Hotel Is Located In Downtown Columbus, Ohio and under exterior renovation to enhance your guest experienceSituated in the heart of Columbus, Ohio, this hotels location is close to everything! The Holiday Inn® Hotel Columbus Downtown - Capitol Square not only provides an excellent location but also wonderful features like on-site parking for a $12 nightly fee and a complimentary airport shuttle between 7am and 11pm. We're close to I-70, I-71 and I-670, too, which makes it convenient to travel around downtown Columbus, OH. Those visiting the city for leisure appreciate our proximity to the Statehouse and Ohio State University. Families enjoy filing their days with trips to the nearby Columbus Zoo and Aquarium and the Center of Science and Industry (COSI). Adults also love that downtown hot spots like the Brewery District and German Village are within walking distance of our address in downtown Columbus, Ohio.Our hotels accommodations have everything you need for a convenient stay in Columbus, Ohio. The hotels fitness center is well equipped for workouts, and the indoor pool enables guests to swim year round. We even have an on-site restaurant and bar, so you do not have to go out for a delicious meal. Let us help you plan your trip today!
干净度
8.2
舒适
8.2
设施
7.5
地点
8.6
整体
7.8 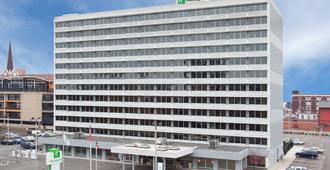 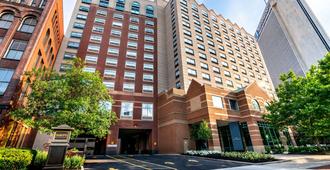 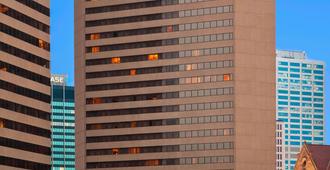